For NT, NQ and WA fishos. Kicks off March 1, 2020. Winners chosen from the best six of 10 rounds, so enter until July for a chance to win. Details inside.
Post Reply
23 posts 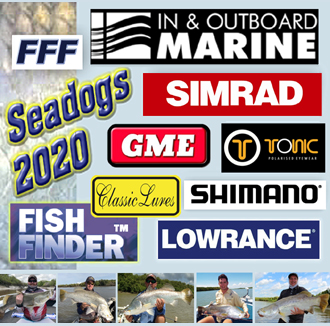 By posting your fish you agree to the competition rules.

Best six of 10 monthly rounds, so you can enter until July with a chance to win.

Some Queenslanders are registering shortly.

However, looks like they have lost jewies as an option already as the state catch quota is already filled!

Invited some Kimberley mob but seems they are scared ...

I wont be in this year, has been a pretty hectic few months moving the family up to northern QLD and getting settled in.Hopefully next year i can have a crack and your right Matt, Jewies are off limits to us rec's as the pro's have already hit their 20t quota,great effort QLD Fisheries for being so out of touch with the people they represent

Jewies are off limits to us rec's as the pro's have already hit their 20t quota,great effort QLD Fisheries for being so out of touch with the people they represent

Yep 20t of roed up jewies,could of been after they spawned
Top

I can understand them stopping the pro's when they have reached their quota but to also stop rec fishos is just plain stupid.
Is the closure for the rest of the year or is there a time when the quota resets.
What angler can cross over a bridge without peering over its side
Top

It's always good to go fishing on your birthday. Even if it's not the best tides. Small barra are better than no barra. 54cm to kick start my campaign for the year with time to upgrade. Still having issues loading pictures. Woods inlet on monday. Bit of rain, wind and rough water made for a challenging day.

PART_1583410712917.jpg
PART_1583410735359.jpg
You do not have the required permissions to view the files attached to this post.
how many is enough lures, rods and reels. Is there a magic number, considering you usually only catch 1 fish on a single lure on the one rod and reel your casting with.
Top

Swoffa wrote: ↑
Thu Mar 05, 2020 6:28 pm
I can understand them stopping the pro's when they have reached their quota but to also stop rec fishos is just plain stupid.
Is the closure for the rest of the year or is there a time when the quota resets.

Yep the rest of the year,open again on 1st jan.

Went and launched at 6-pack creek, and had a bit of fun today, nailing a few small baz. Biggest went 53cm!! Yay!!!! On the board for 2020!!!
You do not have the required permissions to view the files attached to this post.
Top

Went for a flick in the harbour today [sunday]. Cast the gold bomber so many times for not much. Had one hit and as happens tried to work the lure but no line tension. I wound as fast as possible to find the lure already next to the boat but the fish was gone. Probably a threadie i told myself. Always disappointing to drop a threadie as they fight hard and taste great.
After many more disappointing casts including at working barra and threadies, i finally changed lures to the one that worked on monday. It is a sinking white rapala that is just smaller than a bomber. On the first cast I hooked up on a 50cm fish. Working down deeper proved very effective and I managed to catch a series of under sized fish from 50 to 54cm. My 8th fish finally was legal at 55 but I prefer to be on the above legal side than the only just legal side. So i got a pic to upgrade from my birthday fish from last Monday. The system was working well and I dropped a few along the way as well as missing the strike. Pausing a little longer to get more depth was working and hits were hapening on the pause but not hooking every time.
The 10th fish was big. It pulled drag and darted around powerfully. I was excited to be fighting a big fish, until a 3ft shark surfaced with my new favourite lure in it's mouth. I netted the shark and retreived my lure and let the shark swim away. The next strike was different with lots of vibration through the line. Turned out to be a p o w e r t a i l hooked in the tail.
I finally hooked a better barra that came in at 58cm and went into the esky. Another set of pics to upgrade again. Still disappointing but at least a legal size. The final 13th barra came from a different spot but measured 60cm. May not be a huge fish but was a nice way to end a easy trip in the harbour. You can see the lure attached to the top of a fishes head below.

The best we could manage from a weeks fishing.. heaps in the 80s to keep us entertained.

After all that rain together with the big tides this week I didn’t expect to catch anything in the harbour however I did and am now on the board. A 63 from West Arm yesterday.
You do not have the required permissions to view the files attached to this post.
Top

First fish for seadogs 85cm- marsh creek caught on the cast. Only fish for the day
You do not have the required permissions to view the files attached to this post.
Top

Welcome to the game