If you are into billfish, this is your home.
Post Reply
8 posts • Page 1 of 1 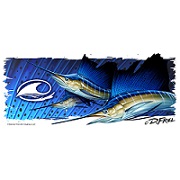 Loaded up the boat with a mate and headed out to the Trench to fish the DTBC BlueWater Classic. Our aim was to just concentrate on Billfish for the comp and not much else. Billfishing is still a work in progress for us, we've had a crack a few times and got a couple but our hook-up and landing rate is pretty ordinary and this wasn't going to change this trip.

With the boat loaded to the hilt, 380 litres fuel internal and 120 litres in spare jerry's (6.4m Trophy CC) we launched at Dinah and headed out. Weather was good and we passed Stena Clyde to grab a few Trevors and were on our way again. The ground from Stena towards Afghan Shoal was covered with heaps of bait and tuna, we hooked a couple of tuna and landed so we had something to weigh in just in case. We should've set some billfish gear out there and had a crack but kept heading towards the Trench as the trip never gets any shorter.

The grounds just west of the light house and the Golf Ball looked good, really good with heaps of tuna and birds working but North we continued to probably 20kms into the Trench. Weather was great and we decided to set-up teasers and gars and run some gear.

First 5 mins into trolling and we had a nice Sail on. With only 2 on-board it's a lot of work dragging teasers in and rods but we managed and probably 20 minutes later landed a Sail that went close to 1.8m. Pretty stoked at this stage. The afternoon we managed to raise and hook another couple of Sails but lost them with a crimp pulling and one through the teaser trail. 3-3-1 for half a day so headed in and decided to pull up camp around the golf ball.

Dropped a few gulps under the boat before bed and when we woke and landed some nice snapper, cod, coral trout and a few other things to weigh in and have a feed on return.

After a poop night sleep we headed out again to the trench and raised another 3 sails for 1 hook-up but again lost the fish, really does take some good coordination with gear and I need to work on some new teaser retrieval gear.

Headed back towards Darwin late afternoon and decided to have a crack in the area between Afghan and Stena as again it was alive with birds and tuna. Ran a teaser and a couple of gars with a Halco Laser Pro deep when the reel screamed. Again, all hands on deck pulling gear and had the fish on for a little when it surfaced - F-Me it was a big Black Marlin with the fattest head on it and with one big head shake the halco was thrown to North Gutter................................We just stood in awe and couldn't believe it!!!!

Anyway, short of it was that we went 7-5-1 and need to look at setting the gear up to manage a bit better when short handed like that. A new set of outriggers will be ordered soon and a better teaser retrieval system but awesome couple of days.

We did 450 kms, used 400 litres fuel with the obligatory XXXX or dozen consumed.

Some photos below
You do not have the required permissions to view the files attached to this post.

Wow, great story. And you got a decent feed too

I did one of the billfish comps years ago and we went all over the place looking for them, but when we came back for the day all the bait was just off Nightcliff! There was acres of bait, birds and jellybean tuna, never seen anything like it there since, it was crazy, and I did wonder if we had concentrated our efforts there if we might have got a billy. They have been caught off Lee Point.

Great effort boys... nice mixed bag of reefies too..... look forward to hearing about the next trip
Top

Great read, thanks for posting