LB finally got permission to head out and we planned a trip to Leaders Creek, one of our favourite spots.
It was especially exciting as we were taking the new boat out for its first run.
The road out was pretty good, and when we got out there we saw dozens of boats in the compound. Steve explained that the Howard Springs fishing club were holding a tournament.

We were on the water before 6pm at the top of the high and enjoyed the calm estuary waters on the way to the mouth. The plan was to fish the channel just up from the mouth on the outgoing, then have a look around while waiting for the slack.

After a 15 minute tussle he pulled in a stonker…see his version here http://www.fishingterritory.com/viewtopic.php?t=21156 see the picture below. It was a 122cm/16kg Jewie…..yehar
😎 😎 😎 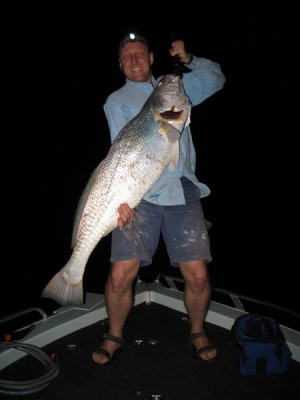 We had another big run not long after this but that was it for the night and we passed out sometime…….

Woke up just before dawn and decided to check out the mouth of Adelaide River. Went to a hole that was supposed to hold Jewies and enjoyed a run on some pan sized finger marks.

About mid morning it was time to head back so we cruised in and Chris pulled us out. Wouldn’t mind trying SWA next time.

Really impressed with the new sounder/GPS purchased from Barralistic (sorry you are down south mate!) but still need to spend some hours in the rig to get used to it. Still don’t have the leccy on, though love the mount that GSM out on.

Looking forward to getting the kids out for a day.

Tales from The Tinny