With a couple of months away for work i decided that this weekend would be the one to get my fix.
Headed to Shady Fresh to try to notch up a Nov entry for the comp and see if the place was firing. Initial info seemed good with reports of fish going nuts on the last new moon casting poppers and skitter pops so all seemed to be coming together.
headed out mid afternoon and arrived around 1630 to find 2 other boats on the water. Levels looked a little low but i was confident as the high was going to push some water over at around mid night. Threw a reidys with a green back and gold belly(secret billabing lure) on and trolled past the bird platform which can deliver the goods on occasion but it was not to be this time. Went straight to the first rock bar and first troll delivered a missed hit and caught and released a rat.
Moved up and trolled past the top rock bar right up to the end where the lillies had really grown out into the middle – hope the run off rips them out of there. We worked the end section with the lecy motor drfting along and casting to the lillies – JD landed a rat casting a new tsunamai rubber – they really look the goods and i reckon they will be red hot in the daly during the run off. 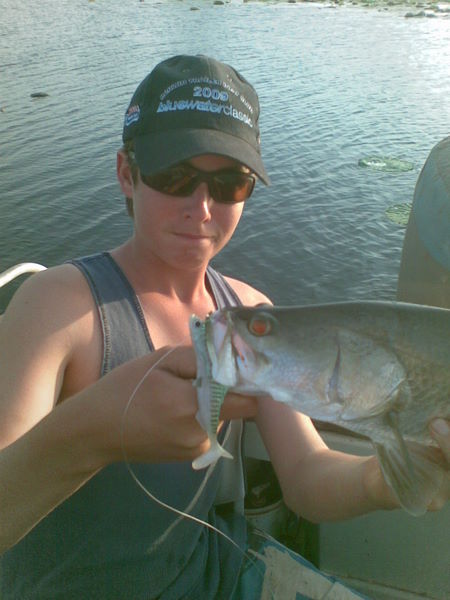 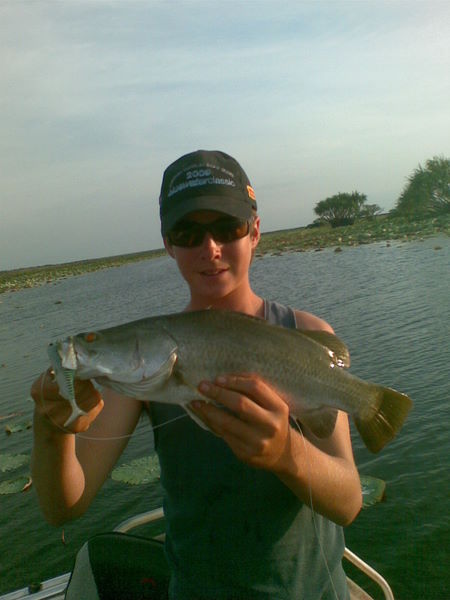 Things got a bit quiet and with the sun about to set we moved to and anchored on one side of the topr rock bar to see if the fish would feed at night, had a quick feed ourselves and rigged for nite fishin. I was casting an 80mm squidgy in drop bear. Trick was to get them down low without hooking the bottom – not an easy task and several traces are testament to the fact that to go too slow was an automatic snag up.
The rats came thick and fast at one stage with a fish every cast for a while. We snagged a couple of good ones – one at 74 cm and one at 70 cm for JD and I to be on the board for Nov. 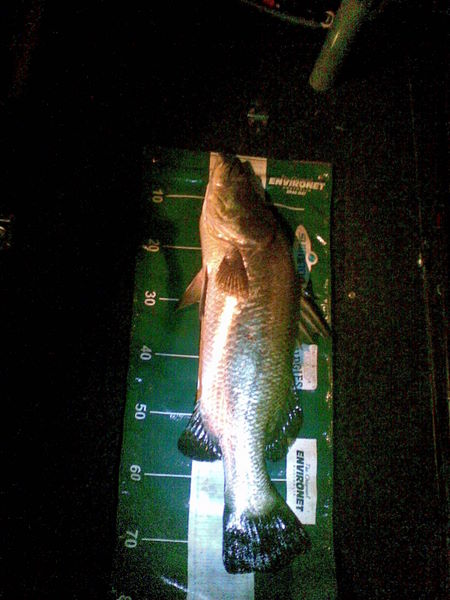 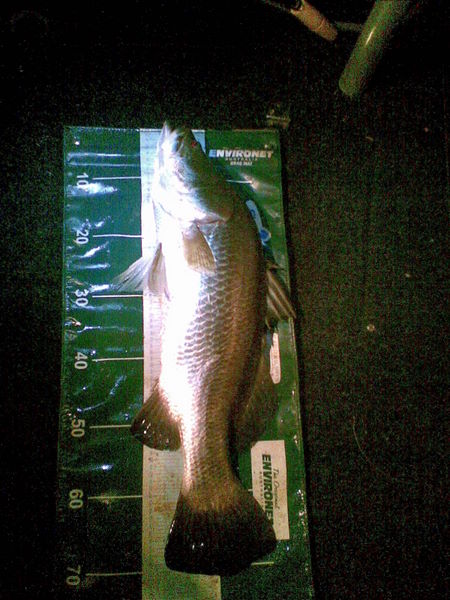 Dropped a few really good fish but that is single hook rubber fishing. Late int he night we moved to the barrage to find the water running in but little or no action – I managed to land a silver 70 odd cm fish to finish the night. Pulled out and trekked home for a nice sleep under air con.
Had a run in with a Kanga after turning onto the highway which made quite a mess of the roo bar but no engine damage so was able to continue home – havent seen to amny roos out there – mainly wallabys but there were a pair of them right in the wrong spot – managed to avoid one but couldn t avoid the second – was surprised there wasnt more damage and expected to get a face full of air bag but they didnt deploy. Oh well panel shop here we come this week.
See how the blue water out off dundee goes tomorrow. Sorry about photo quality – good camera is in the shop getting warranty work done so it was a phone job.