Easter without the crowds – ALMOST

Easter approached and my intial plans were to venture down to have a look at the Roper but Cyclone Paul reared his ugly head and fire trucked all that up so we changed our plans and heade east to some fo the local hot spots aware that the crowds would most likely be shocking.
Travelled out to shady camp on Wednesday afternoon to find many cars and trailers in the car park but only one other group in the right hand camping area so we set up our gear in the right hand area in the awesome shade out there!! :rofl: :rofl: Dropped the boat in on the fresh side and noted the tide was pushing in. Headed down the lagoon to find one boat on the great wall – there was a lot of water running out of a blow out in the bank just down from the great wall – heaps of tarpon so we anchored up for a few casts – soon landed a nice 70 odd cm swampy which fought hard in the shallow water – another rat quickly followed along with a few tarpon. 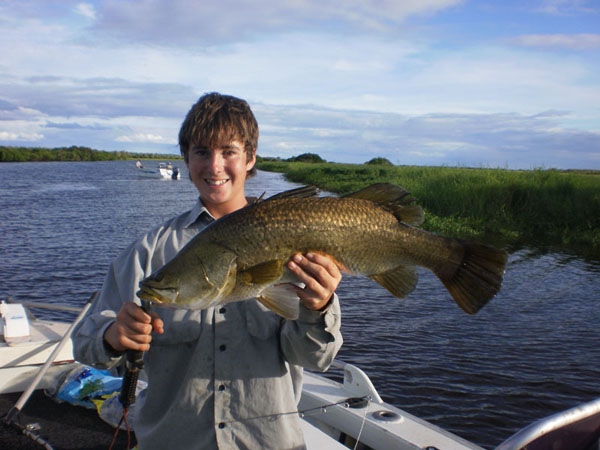 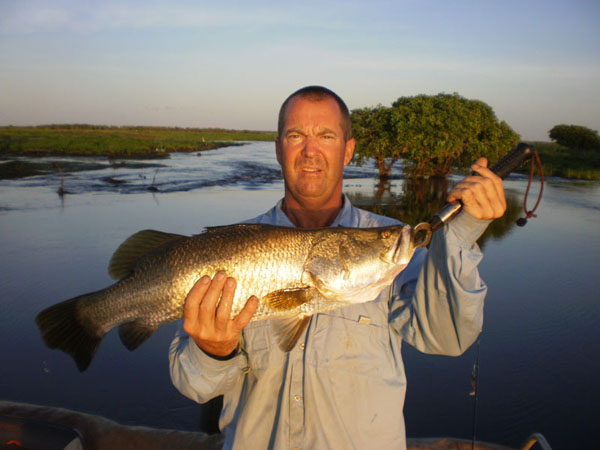 Things went quiet so we wnt down further to have a look around – discovered a new gap int he lillies feeding water in just near the fence line and espite plenty of tarpon there were no bazzas there – sun was getting down and mossies getting ferocious so we did a quick look at the barrage and landed plenty of tank sized barra before sucumbing to the mossies and retreating to the tent.
Up in the morning and went to the blow out again and quickly snagged a couple more barra before it went dead again – with the tide pushing in we decided to brave the awesome launching at Shady and went down the salt side. Had a look at the third barrage but found little water running over and the tide still pushing in – found Millsys secret run off – safe with me mate – 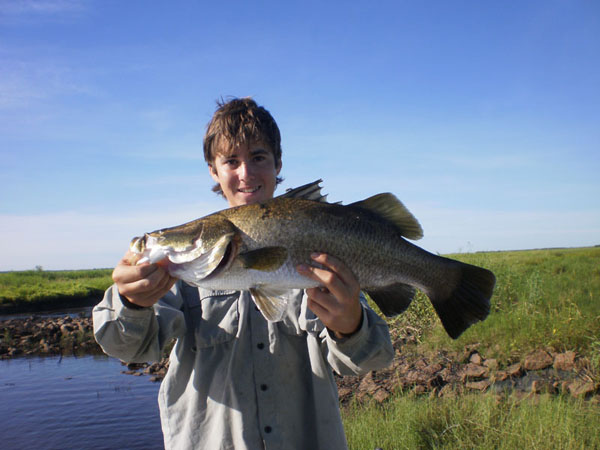 and scored a couple of small barra and some brand new lures from amongst the wire and stuff there – went quiet so we had a look around the second barrage – went up to have a look at the great wall – deep channel has been carved in there now and the second barrage has been washed out really badly – the land owners have placed signs asking boaties not to go through the area to prevent arosion and i can see problems if boaties continue to run through there during the high water – unsure if they can stop you but can see conflict coming as it must be a huge issue for them to repair each year. The blow out will continue to run out until they reapir the damage so unsure how the water levels will hold this year.
Went back to the barrage and dropped back on the fresh side and then caught multitides of small tank barra on small squidgies and fly – kept us amused.
Ran a Dr Depth log over the rock bars ane then went back to catching small barra off the barrage.
Good Friday morning and the multitides arrived – our ususal haunts were now pretty much full – planty of small barra getting caught off the barrage but all tank sized 0- did see some caught by a bloke using a jog head and a large white lure rubber and just lettiing it flutter in the current as the tide started to push in – numerous 60 odd cm fish but mainly rat barra being caught – did notice a big handline hangning in the water on the far side – didnt see anyone pull it in while we were there.
Went down the bottom end and trolled lures for a while for nothing – decided to make a break and go have a look at the East. The road was pretty good ocnsidering the amount of traffic heading in – we could have gone to the mouth but we were not really interested in having to work in amongst all the boast down there. Had a hcat with a couple of local fihsing legends down there who had been fishing the wildman and they had landed a 116 cm fish but jad done it a bit tough – mossies were AWFUL.
Packed up camp and headed out to the east – Magella was only at about 400 mm and no worries. Merl camp ground had plenty of spaces and we were soon set up. Went down and grabbed acouple of bags of ice and dropped into the sal side. Went down stream a few kms and had a cast at a few of the creek mouths to ifnd them looking poretty dead – JD snagged a couplem of nice silver rat barra – seems the word that fishing was tough in the East werent an exageration!! 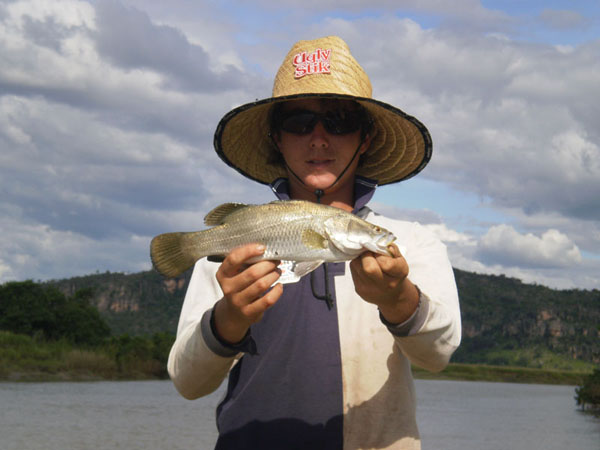 Quickly did a drop in the fresh side but found it smelly and still flowing quite hard – girls at the store told us the Cahills is at 1.1 metres at low tide right now. Went back to camp and enjoyed a shower and good sleep.
Up early and in to the river on a run out tide – no issues at the rock bar and plain sailing down to Magella – only one breath taking moment when the depth quickly went to 400 mm but then over it so no worries – could just have esy have been stuck on a sand bar but didnt happen. Few quick casts at the mouth for nothing and then ran up to the top. Surprised to find no other boats in the creek – now i was concerned as surely we werent the only ones here!! Cast the water to foam but couldnt raise a scale – OH OH have we made a big mistake here. Noticed millions and millions of baby catfish in the pools of water along the edges of the water – this didnt register much at the time but really came home to play shortly after.
Headed down stream and fished all the run offs and creeks we coud find – had fished most of the way down the creek and thinsg were looking pretty sad when JD finally snagged a nice barra – cleanish but just aundersize so we dropped the pick. What followed was an awesome session over a few hours on a very non descript creek mouth. 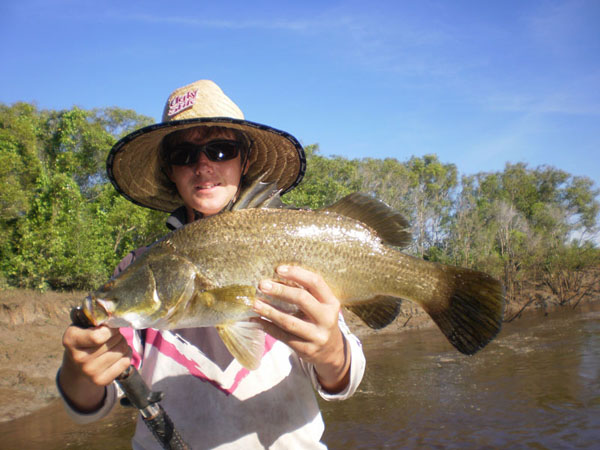 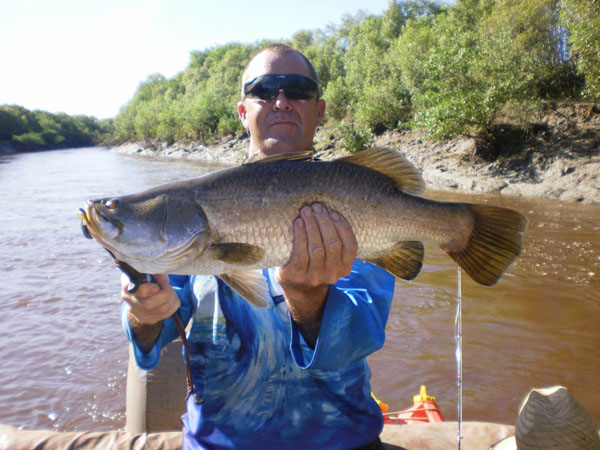 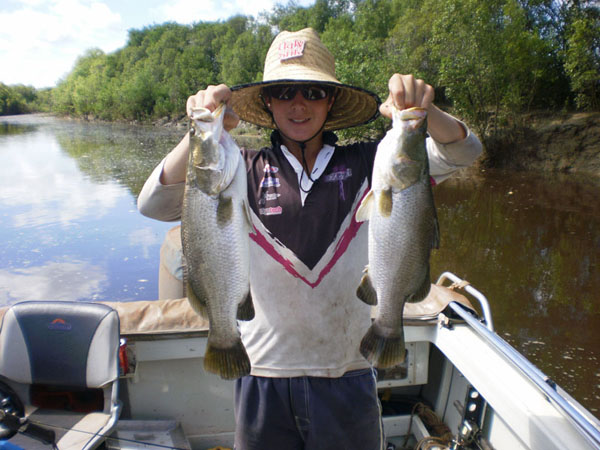 JD was using 65 mm squidgies soft plastics in rainbow trout and this is the only lure they would take – tried heaps of others but they just wouldnt take anything else – if i had though i would have taken a photo of the catfish as the rainbow trout is a dead ringer for it. Between us we probably landed 30 odd barra – most around 54 or 55cm – some cleaner than others – kept 3 of the cleanest for a feed and went back up as the tide stopped the flow – thought the fish may have moved up the river – There was one other boat on the creek by this stage and he had passed us as we sat on the creek mouth – they were at the junction and had yet to land a barra – they told us they were staying at South Alligator and had tripped out for the day 😯 😯 Tells you how good the fishing in the south was.
With the tide now rushing in we went back up river – amazing to see barra free swimming on the surface on a number of occassions but they werent interested in anything we through at em. As the water had slowed right down we logged the rock bar – the water was running back over Cahills as we pulled out and there were plenty of boats fishing the crossing but didnt see a fish landed while we sat there.
Did see some stupid pricks in the car park who were too lazy to drive to the next car park and chose instead to park illegally int he cars parks – just plain rude – how can we as fishos compain when lazy pricks do this kind of stuff – also the ranger drove past while i was getting my car and did nothing about it – WTF.
Packed up and headed home – good few days on the water – MERL camp ground is a great place to stay – the mossies were non existent out there – what did peev me off was the fact that some ignorant so and so think they are above the rules and leave there generator going all night – once again just rude ignorant fishos – should have dropped a couple of sugar cubes int he fuel tank – that would have fixed the problem!!
All in all a couple of good days fishing – plenty of fish albeit a bit on the small side – God camping – mossies were shocking at Shady but no issues at the East.
Interesting to note that the river was chockas with mullet – heaps and heaps of them – schools of them evrywhere – all very nervous but nothing boofing them while we were there. An observation was that most people were chicking big lures such as classics etc and not small lures – the killer lure up and down the river was the squidgie 65mm in rainbow trout as mentioned previously.