A Dingo, a Cox and a Mexican

It was the last weekend in October and my last run of visitors. My brother in law Steve and his mate Coxy. They flew in Friday and were keen to kick back and catch a barra. Best thing I thought would be to hit Shady Friday night and try for a barra, get that out of the way and the pressure was off.

Got out to Shady Friday just before dark and were greeted by an empty car park and it stayed that way all night. This either meant the fish had gone off, or we were lucky as everyone was too lazy to make the trip out. We trolled the lower rockbar first for nothing, so things were not looking good. We then moved to the upper rockbar where I got myself a 57cm, and when it got dark Coxy picked up a 67cm and a 63cm so mission had been accomplished. Steve did not put a rod in the water, he was happy just kicking back with a can in hand. Once we had some runs on the board we casted rubbers at the rockbar and surface lures around for no action at all. 3 Keepers for the night on Reidy’s Lucifers and back to Point Stuart for some kip at 10pm. Nothing wrong with that. 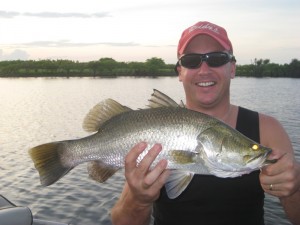 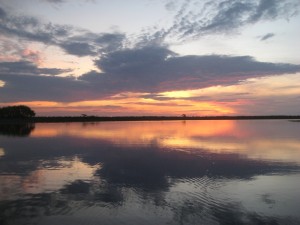 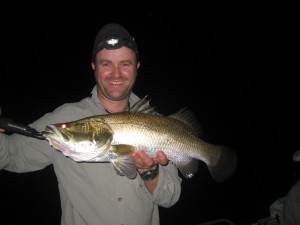 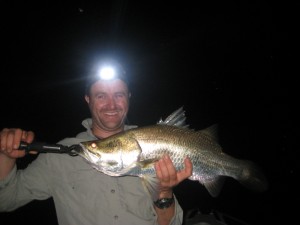 We rose at 5am and headed back to Shady for the sunrise. We tried casting and trolling everything possible, but the fish had shut down. The boys were struggling with the heat and we were off the water by 11am fishless. There were three other boats on the water that morning. We had a few good strikes casting weedless and frogs around the lilies but that was it. 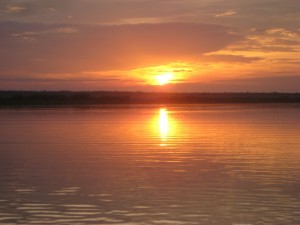 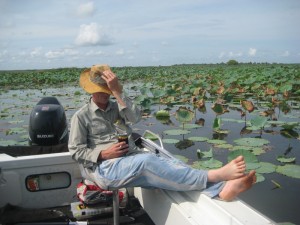 We called into the Bark Hutt for some grub and then put the boat in at the Adelaide River for a quick cruise up to Goat Island for a couple of relaxing beers on our way into Darwin. It is just something you have to do. Only one problem though, we left the wallets in the car, luckily we had enough coins in the boat for one can each. The boys were impressed and a great way to finish off the day.

Sat night and we were in Darwin planning for my first assault on Salt Water Arm. Some generous FFFers had given me some tips. We were very excited sitting around waiting for the mornings fishing with anticipation of some silver slappers. We woke at 4am to heavy rain, we checked the radar and it was not looking to good, so we went soft and went back to bed. We just did not fancy sitting in the boat drenched, and skidding around on Gunn Point Road, when we could do something else in the arvo when the weather had cleared, we are definately spoilt for options up here. When we did get up we thought the low tide has gone, we have to do something for the day, so we did a detour on the way home and called into the Finniss Fresh on the way back to Litchfield NP. I just love the look of this place, tropical Jungle with timber everywhere “A Caster’s dream”. We saw some barra and sight casted to a few but they were just not interested, it was as though they had been on the Hippy Weed or something. After a few hours of casting we spent the last hour doing some deep river trolling for something different and Coxy managed a 60cm barra. Crossing the Finniss on the way home it had risen a lot and was over the banks and nearly at the crossing.

Bloody work gets in the way of fishing and Monday I was off to work while the wife took the boys into Sandy Creek Waterfall, Buley and a few other things, not Wangi though as it has just closed for swimming again.They met me at work in the arvo with my cruiser with a few ales on board, a couple of rods, cameras and lures, and we went off on a little adventure in search of the hard hitting ‘Sooty Grunter’. We headed off towards some water I had been to a few months back, the only problem was that the grass and trees had grown and I was not to sure if I was heading in the right direction at first, but we made a track in and found what we were after, some friggen water to cast into. We picked up a rod and a lure or two and set off walking the banks trying to find a gap in the dense vegetation to cast a lure. I love this ‘crap’ We worked a few lures in the main billabong, I lost a barra early but the flowing water upstream was tempting us too much so that is where we headed. We cast around the rocks for a few missed strikes and a couple of fish. I picked up a little Sooty and a very small barra. But this meant he must have a mummy. Coxy also got a barra and good sooty so it was a good arvo. Coxy did lose a barra which tore through the leader when he thumbed it to get it out of the snags. He did jump around a few times after trying to lose the Lucifer which was stuck in his lip. We saw him jump enough times and he must have been in the low to mid 70’s. We could have stayed for longer, but we gave the wife a deadline, that if we were not home by this time come and get us as we were bogged, so off we left. 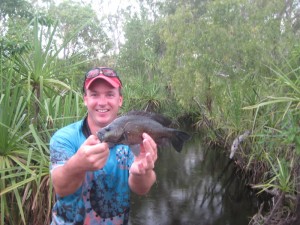 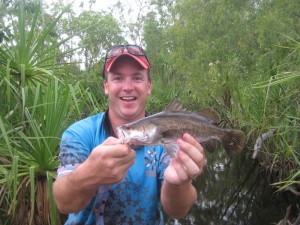 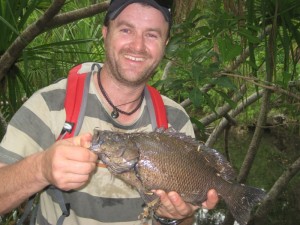 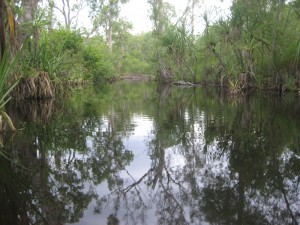 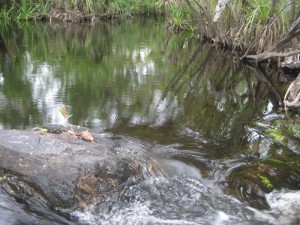 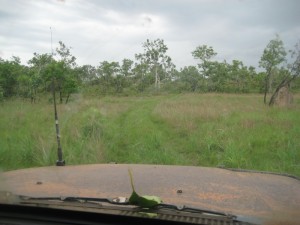 It was a shame we did not get to SWA arm, but not a bad way to spend the weekend. I am sure the boys enjoyed themselves and saw a variety of places including some of Litchfield NP’s best. And in my view chasing Sooty’s through tropical jungle streams with sweat pouring off you is an awesome way to spend a few hours, or even days it was a great way to finish off the boys weekend.

2 Responses to A Dingo, a Cox and a Mexican