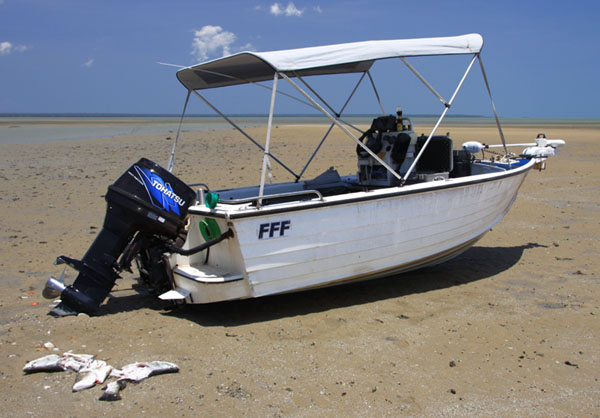 I spent the past six weeks travelling to the Kimberley, Tasmania, Brisbane and Hotham.

The Kimberley trip was a 12-day stint with Mal Miles of www.darwinbluewater.com.au as part of a prize for lucky NTMAG reader Jon ‘The Fisho’ Vogel.

It was a great trip to some new areas, and will feature in the Feb 2010 NTMAG.

Tasmania was a work and play trip – a long story – suffice to say it rained the whole time as Tassie’s years-long drought had broken in a big way, with eight weeks of non-stop rain.

The place was glowing green and beautiful, but our tot got a chest infection and no fishing was done.

Instead we tucked into venison pies, Tassie seafood, checked out local arts and crafts and enjoyed the log fires – a nice change.

I was disappointed to see the extent of forestry in Tasmania – companies like Great Southern and Timbercorp have ripped out large tracts of natural forest to install monoculture plantations, and the forest clearing continues.

Sadly, there have been problems with the forestry – not least that Great Southern and Timbercorp went bust.

The forestry issue is a lesson for the NT. We are still in a position in the NT to fight these sort of things, and at least demand proper management of agriculture.

So, then it was on to Brisbane where the traffic was crazy. It was dry, dusty and fairly f…..d up with unbelievable traffic. We were there shortly after the NSW dust storm went through.

The Brisbane I remember as a kid was green and lush. Coming back to Darwin was a relief.

Darwin is a great place.

Today I went to Cape Hotham, my first barra fishing trip for a while.

The fish were biting on lures for the early push out tide. Fresh barramundi for tea, and all free of chemicals. We take clean fish for granted, but they don’t in Tassie.

And the Saltwater Arm/Leaders Ck road was smooth – great stuff!