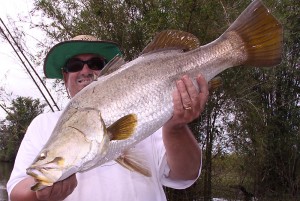 Matt Flynn with a 78cm barra from the Adelaide River

Had a good session on the Adelaide River today.

Fished all the way from “Black Jungle Creek” downstream up as far as Beatrice Creek. A lot of travelling.

Black Jungle was pumping fresh but had no mullet. There were big fish on the sounder at the creek mouth, but not biting.

Got a few fish up at Beatrice Creek on the run-out, but the best fishing came on at another creek during the first run-in tide. All fish were caught casting.

Ended the day with about 30 fish between me and Craig “Crackers” Hand. 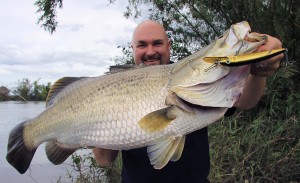 Crackers with a fat fish taken on the Reidys Judge

Fish were all sizes, with the big ones at 79cm – must be a year-class. Couldn’t crack a metre fish, but we landed every big fish we hooked.

All fish taken on lures, we even outfished the livebaiters nearby at Beatrice – they only caught one fish while we caught five. The livebaiters said cherabin were scarce.

Lures of the day were an all-gold Reidys Judge, and small guns’n’roses deep divers, plus rubbers. Most fish were caught on hardbodies.

Saw a load of baby crocodiles, and larger ones. Crackers hooked one of about 2m long on the Judge, but got his lure back in surprisingly good nick.

Most creeks were pumping loads of fresh water.

My best sessions on creek mouths at the Adelaide this year have been immediately the water falls below the carpark. So much for the theory that a lower river is better.

Sadly there were no saltie chrome barra, all had a tinge of green, either that dark from-upriver green, or light billabong/Manton green. Crackers doesn’t mind eating the green ones, and he went home with a bag limit of fat fish. I’ll wait for the chromies!

There was no visible bait at any of the creeks we fished, although there was a lot of bait fuzz on the sounder. We did not see any other fish caught. Not a boof heard all day.

This entry was posted in Barramundi Fishing. Bookmark the permalink.